Caring For Your Plants

Maintenance and Care for Perennial Plants

Mulch around perennials
Apply a layer of mulch around the base of the plants. There are many recommended mulch materials available at varying costs from local garden and landscape businesses. Composting yard wastes and brush can also be chipped and used as mulch. Mulching is very important. Tests have shown that mulched soil can be as much as 30 degrees cooler than bare soil. Mulch helps to prevent weed growth, conserves moisture in the soil, reduces heaving of small plants when freezing and thawing of the soil occurs, and reduces soil erosion on slopes.

Deadheading perennials
Deadheading flowers will encourage new blooms and new growth. After the perennials bloom period, if the plant looks a bit withered, cut it back almost to the ground and allow it to produce new growth. In fall and winter, remove all the dead foliage and stems, then mulch for seasonal protection.

Dividing perennials
Signs that perennials need dividing are flowers that are smaller than normal, centers of the clumps that are hollow and dead, or when the bottom foliage is sparse and poor. Plants that are growing and blooming well should be left alone unless more plants are wanted.

In general, it is best to divide spring and summer blooming perennials in the fall, and fall bloomers in spring. By dividing the plant when it is not flowering, all the plant’s energy can go to root and leaf growth.

If you divide in the spring, allow enough time for roots to settle in before hot weather. Spring division is ideally done in the early spring as soon as the growing tips of the plant have emerged. Spring divided perennials often bloom a little later than usual.

Never divide perennials on hot, sunny days. Wait until a cloudy day, ideally with several days of light rain in the forecast.

Most perennials should be divided every three to five years.

Feeding perennials
The time to feed a perennial is when it starts showing active growth in the spring and once or twice again in the summer to promote healthy leaves and blossoms. Regular applications of compost and manures contribute to plant health but a fertilizing regimen provides essential macro and micro nutrients. Organic fertilizers such as fish emulsion, Blood and Bone, Bone Meal, seaweed, wood ash and Rock Phosphate may be used. Don't feed in late summer or fall, when the plants go dormant. Fertilizers promote new flushes of growth which leave the plant susceptible to being damaged by early frosts.

Maintenance and Care for Ornamental Grasses

Most ornamental grasses require full sun and well-drained soil. Unlike most perennials, their summer beauty lasts through the winter. The brown, dried foliage glistens with a dusting of snow and is still upright and strong in the spring when other flowers are blooming. In the spring before the new growth begins, cut the plants back close to the ground. Every few years, you may need to divide them if the clumps get large and overgrown, or if they need to be rejuvenated.

Cutting back ornamental grasses
Give most ornamental grasses an annual haircut early in spring, cutting them back to within a few inches of the ground. Use hedge shears and wear gloves — some species have very sharp edges. Evergreen and some semi-evergreen varieties will NOT require cutting back, but may just need a comb-through cleaning. Use a rake to clean out the old foliage and debris within the clump.

Some grasses are cool-season growers and start to grow very early in spring. With the cool-season grasses, it's important to remove the previous year's growth as soon as the snow melts. Leaving this job too long can result in plants with chopped-off leaf tips.

When cutting down cool-season grasses, leave about one-third of previous year's growth in place. The new growth will quickly hide the old plant material.

You can cut warm-season grasses right down to the ground if you like, but if you are doing the job late, be sure not to cut into the new growing tips. We like to cut these grasses down a little later because we find that the previous season's buff-colored foliage looks good mixed in with the spring-flowering bulbs.

We have found the most efficient way to cut back the grasses in our large beds is to use gas-powered hedge shears.

We cut the plants down in layers. This ensures that the dead plant material is nicely chopped up into mulch that can be left on the beds.

This has proven much easier than cutting the beds down with a weed-eater or by hand, using shears or pruners. Now a job that used to take a week - because we had to both cut everything down and then haul it to the compost pile - takes a day.

Watering ornamental grasses
Ornamental grasses should be well watered the first season after planting so they can develop a good root system. Established plants do not need regular watering, but may need supplemental watering during drought periods. The amount of water will depend on the grass species, the site, and on the quality, size and growth rate desired.

Feeding ornamental grasses
Established ornamental grasses require relatively low levels of fertility. By keeping the level of nitrogen low, lodging or flopping over can be kept to a minimum. Leaf color and vigor are good guides to nitrogen requirements. Apply fertilizer just as growth resumes in the spring. An application of a slow release fertilizer such as Osmocote in the spring is enough to take care of the plant's needs throughout the summer. Fertilizer should be watered in thoroughly. 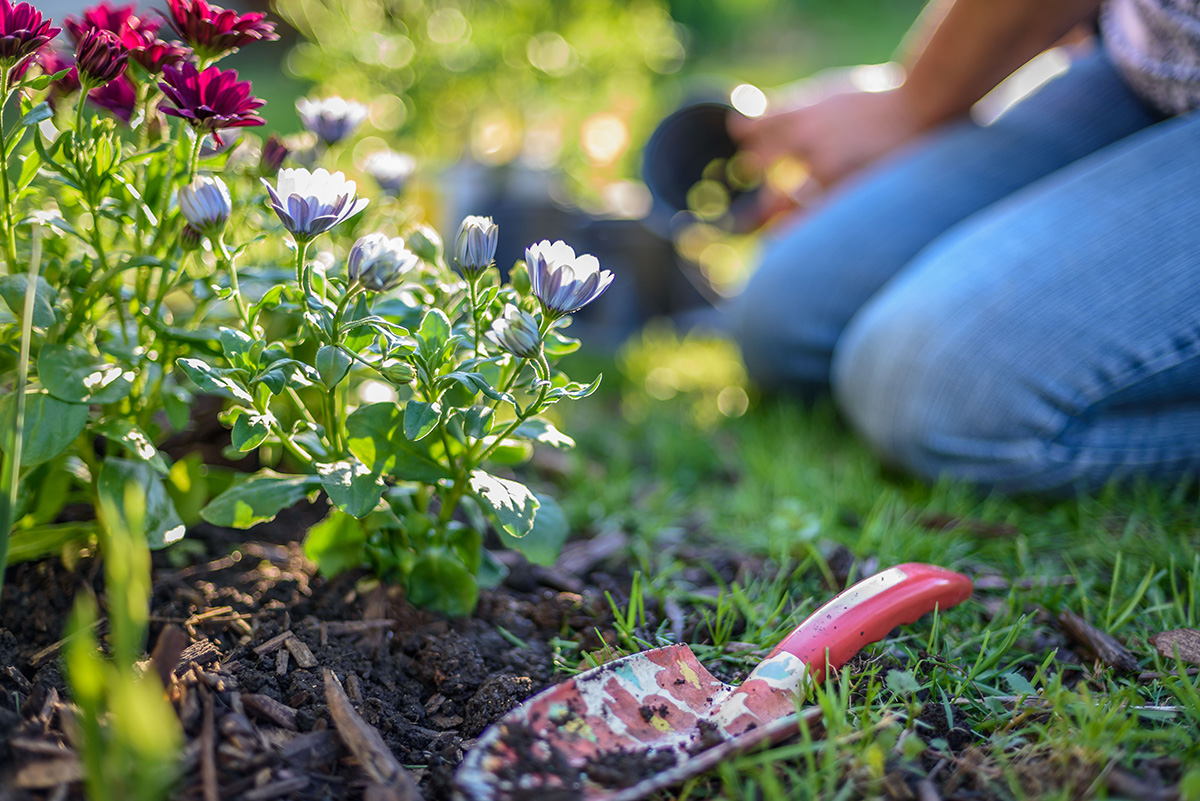